Following outline planning approval earlier this year, Southampton City Council has approved the commercial terms for the Leisure World scheme, enabling progress towards a start on site in early 2023.

The Leisure World development is expected to celebrate the city’s industrial maritime heritage while responding to the need for a mixed-use development in the area.

It is set to involve £250m investment in the city centre, including a cinema, casino, leisure and wellbeing facilities, as well as 650 new homes, two 150-room hotels, and 80 serviced hotel apartments.

The development is also expected to create over 1000 jobs and improve transport links within the city centre, while creating an improved public realm and modern workspaces. 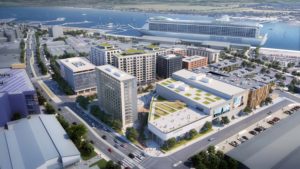 Cllr Jeremy Moulton, deputy leader and cabinet member for growth at Southampton City Council, said: ‘Leisure World is a key development site within Southampton and is particularly important to support recovery from the pandemic as we grow the local economy and get Southampton moving.

‘Through this inward investment, the Leisure World development not only creates a large number of jobs during the six to eight years of construction, it also creates many new permanent jobs once the scheme is completed.

‘It’s fantastic news that the terms of the conditional development agreement and new head-lease has been approved as this enables all parties to progress the scheme forward and I look forward to seeing a start on site.’

The Council will be working with developer Sovereign Centros on the scheme, ensuring that environmental considerations are reflected in the design, including low-carbon technologies and greening of the public realm.

John Marsh, director at Sovereign Centros, said: ‘This agreement with Southampton City Council is an important part of the process that will unlock substantial investment in the city. It will ensure the rejuvenation of this strategic site, which represents one of the most significant redevelopments Southampton has seen in a long time.’

The scheme will be built across different phases, beginning in early 2023 with the first phase expected to be occupied during 2024-25.